A Guide To Explore The World

January 1st 2017, 12:00 AM. It is now officially my last full day in Chicago, before I take off indefinitely. I leave in 40 hours, and everything is still where it is, haven’t packed a thing. Lots of farewells, goodbyes, and so on; there was very little time to work on the actual move. I’m taking a carryon/backpack, so packing for the trip is not the issue. The stuff I’m leaving behind, clothes, general house items, and electronics are what need to be worked on. I had most of the furniture sold or given away; the mattress was among the the things I decided to keep in storage. The TV and playstation as well, obviously.

I get home from Spybar at 5:00 AM, where we kicked off the New Year listening to my roommate’s, Ali, live set at one of our favorite clubs in Chicago. About to pass out to wake up for a day full of packing/sorting/organizing activities. Ali (or stage name DJ Cena), will tag along the tour through South America, only a day later than me. We are to start in Havana, Cuba.

DJ Cena gets invited to get on the decks at one of the best daytime spots to play music in the city. We both have a sweet spot for this venue, spending numerous afternoons that turned into evenings and subsequently, late nights there.

“My set will be around 10:00 AM, you have to make it, it’s your last day, and our last time together at Estate”, Ali says. I reply, “It’s my last day, and that’s exactly why I can’t make it, I have to pack man. I’m practically leaving tomorrow”.

Ali convinces me in the end by promising to help me pack, with help from our third roommate and old friend, Gobba. “Ok, what are we to do until 10:00 AM? If I fall asleep, there’s no way I’m getting up that early for a party”, Gobba says. Ali replies, “The party starts in an hour, we’ll go hangout there till my set time”. With the right ‘incentive’ (or ‘bribe’), we set foot to Estate, which is a 10 minute walk from our place.

Next thing you know, it’s 1:00 AM, January 3rd, 2017. My flight is today, in about 14 hours. House is still the same. After crashing and waking up with a mixture of thirst, hangover, and a little stress, it was now or never. I pack the stuff I’m taking along first, and if time permits, I’ll work on the rest. The car I had rented these days was a Chrysler PT cruiser, rented from a guy living in the suburbs, and not a rental company. I plan to leave it for Gobba who thankfully, yet hesitantly, agrees to handle the painful return.

I’m in Havana, hanging by a big touristy, ridiculously expensive hotel to connect to their WiFi. In case you didn’t know, this is the only way you can get online in Cuba. And, it’s not as easy as it sounds, you actually have to buy a card with a username/password combination from a dealer on the street. If you have any experience scoring illegal stuff, this one is no different. At this point, Day 1 of the trip, I have lots of loose ends to tie back in the US. These are open items that I pretty much forgot about, such as closing my account with the gas company, electric company, and the likes. Also, trying to get in touch with my loyal homeboy Gobba, to see if he had returned the car, or whether I’ll be getting a ‘theft charge’ on my credit card. Gobba confirms that he will return the car the day that follows, and also notifies me that the mattress didn’t make it. It was too big for the storage, so they tossed it from the second floor. Anyway, the attempt of being online takes about 90 minutes, scoring 3 x 30 minute cards from the dealer. This includes a call to Gobba, the electric company and replying to a few emails. 90 minutes. All that, and I don’t get much done due to the dial up speed I’m facing. The sound of the good old dial up modem was ringing in my ears. I still know it by heart.

Jamila and I had met prior at the airport baggage claim. We met easily, although communication was absent. Ali and Sayed join us the next few days after, and we start strolling down the streets of Havana, checking out some attractions, eating the occasional homemade pizza sold from house windows. The nice lady across the street pauses the show she’s watching and goes on to bake the pizza, while we listen to her kids playing and screaming along. In another scene, we are running in the pouring rain to get to some rum and cola in a vintage themed bar, after the ‘afro-beat’ street concludes.

One night we end up at a 3-4 story Cuban restaurant, with at least 100 individuals employed. We are greeted in Spanish and handed a book, that serves purpose as a food menu. Endless options, countless pages, we are hungry and starting to get really excited. The napkins are folded into duck and bird shapes, the waiters are pouring the water in the glasses with some style; I feel unwillingly classy for a second.

Ali and I consider the special dishes; they are on a white piece of paper, glued to the menu. Sayed is looking into the seafood options and one duck platter that sounds mouthwatering. Jamila admiring the wine list and finding it really hard to choose. We are then approached by one of the 100 employees, with a memo pad to take our oder. “Una” I say, while pointing to the item I want from the special ‘glued’ list. “No”, says the waiter. “Ok, how about this one?”, I point at another. “No” the waiter goes, while notifying me with hand gesture that this whole list is out. Ali and I are bummed but ask him to take everyone else’s order, until we look at the rest of the menu. We are then bombarded by constant “No”s when Jamila and Sayed are ordering. Losing hope, we ask the waiter what’s available from all of this menu, and he replies in a sound that echoes what you hear on the airplane. “Beef or Chicken?”. He immediately takes it back, and goes to make sure by asking another waiter if the beef is still available. He comes back and says there is only one beef left, but thankfully, the chicken is available. So, we order 3 chicken platters and 1 beef to fight for. I can’t help but think, what about the people that are still waiting to be seated.. Will they find anything else to eat? Poor guys.

Another highlight, us four in a 1950s Ford taxi, blasting the Malecon song, on our way to a salsa club. The song that Ali and I end up memorizing, and later on surprise the crowd in Bolivia during a live Cuban show by singing along. Becomes an absolute favorite. Regardless, some serious Egyptian salsa was going down that night.

I like Havana. But spending time at the hillside, Viñales, was on point. I am biased, however, and prefer nature to the hustle and bustle of cities, so it’s just my own preference. The highlight here is Ali’s horseback riding skills. “I know how to ride, but haven’t done so in years”, he says. Ali happened to be on the only disobedient horse of the group, and the guide is constantly trying to steer the horse away from the bushes. Ali figures that his horse is just hungry. We ride these horses for hours, and we get to a farm, where you learn the astounding mixture of Cuban cigar and coffee. The cigars are hand-rolled by the farmers, nicotine-free, preservative-free. You are reminded with the freshness in every puff. We dip our cigars in honey, sipping on fresh coffee while the rain is slamming our little kazeebo from every direction. I take it all in. I think of the next few months and the thrills they’ll bring. It all starts at this particular moment. 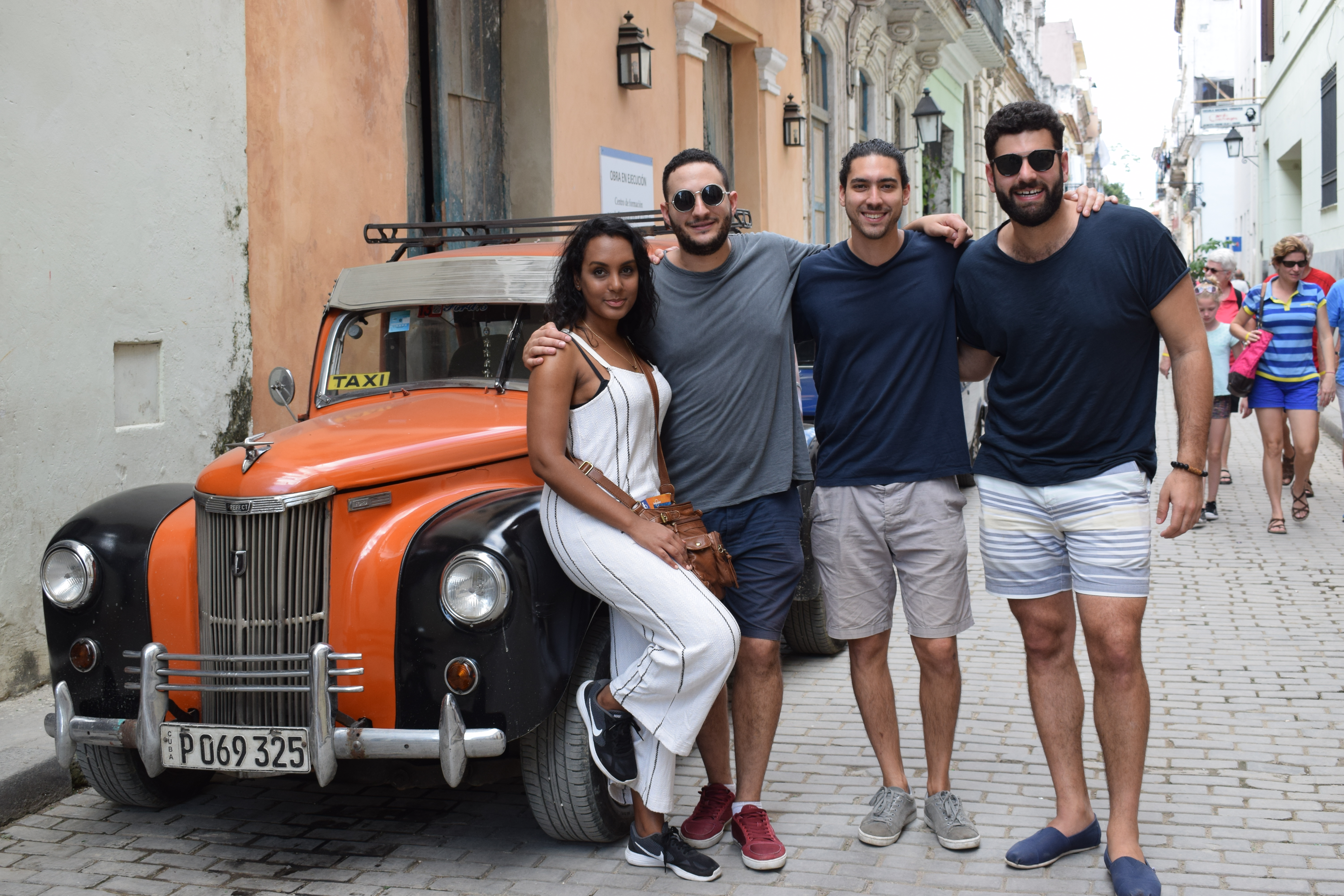